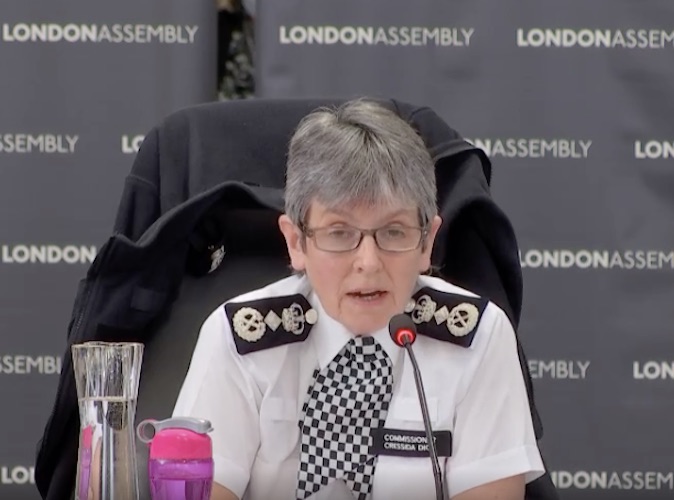 Cressida Dick prepared the ground with care before announcing that the Met will investigate a “number of” lockdown gatherings in Downing Street and Whitehall for potential breaches of Covid regulations. “We police without fear or favour” she said. “We police impartially and we police in an operationally independent manner.” She continued: “In general we have not normally investigated breaches of the regulations when they have been reported long after they have been said to have taken place”.

However, the commissioner said that was “never a blanket rule” and retrospective investigations had been conducted into “the most serious and flagrant type of breach” when “three factors came into play” – one, the presence of “evidence that those involved knew or ought to have known that what they were doing was an offence”; two, “where not investigating would significantly undermine the legitimacy of the law; three, “where there was little ambiguity around the absence of any reasonable defence”.

This is a perilous development for Boris Johnson, who has welcomed the Met’s probe for public consumption despite “partygate” appearing well within the scope of the “three factors”. Quite apart from the further damage it threatens to his premiership, the possibility of being hit with a fixed penalty fine will send a shudder through a man who is a notorious tightwad.

But the stakes are high for the Met commissioner too. Inquiries are expected to be painstaking and slow, and so would mine be if I were the nation’s “top cop” probing the heart of a government whose Home Secretary had just gave you two more years in my job. Not least because of that any outcome short of one that topples the PM – assuming he isn’t toppled by Tory MPs first – is bound to be denounced as demonstrating both fear and favour, at least by some.

Whatever the result, the process has got to be flawless and seen to be so. And in that lies an opportunity for the commissioner and the institution she leads to start getting a grip on the biggest problem it currently has – a loss of Londoners’ trust.

The headline data is alarming. Liberal Democrat London Assembly member Caroline Pidgeon has highlighted consecutive falls in the proportion of Londoners expressing confidence in the Met from 69 per cent in 2017 to just 52 per cent last autumn.

It is not hard to find suspects for this decline. The horrible murder of Sarah Everard by a serving Met officer was the stuff of nightmares come true. We’ve seen cops imprisoned for sharing and joking about images of murder victims whose bodies they were meant to be guarding. An inquest jury attributed the  failure to catch serial killer Stephen Port to serial Met incompetence.

In recent days alone a counter-terrorism officer has been jailed for tricking and covertly filming naked women, two senior Met officers have been dismissed for gross misconduct that included “misusing” a corporate credit card and treating junior colleagues – including a pregnant woman – appallingly, and a woman deceived into a sexual relationship with an undercover Met officer has been awarded compensation after a damning tribunal judgement.

Then there’s the treatment of Kostancja Duff who was handcuffed and strip-searched at Stoke Newington police station while a bunch of Met officers laughed about it. She was cleared of all criminal charges and later won a civil claim. The search took place in 2013 and Duff has only just got hold of CCTV footage of some of the officers, male and female, involved. The incident may have taken place some years ago, but can we have confidence that the glimpse of police attitudes those grimy images reveal is less prevalent now than it was then?  The “banter” is repellent. If you encountered people talking like that in the street, you’d cross the road.

Most political debate about policing in London concerns resources: property, equipment, “police numbers” and so on. But while the Met should not be short-handed or under-funded, there has, until lately, been too little attention paid to the quality of London policing, from institutional attitudes to bread-and-butter efficiency. Get those things right and confidence and trust, so vital to effective police work, start taking care of themselves. Good cops are the greatest, bad cops are the worst. Whatever comes out of it, the “partygate” investigation must show the Met at its very best.