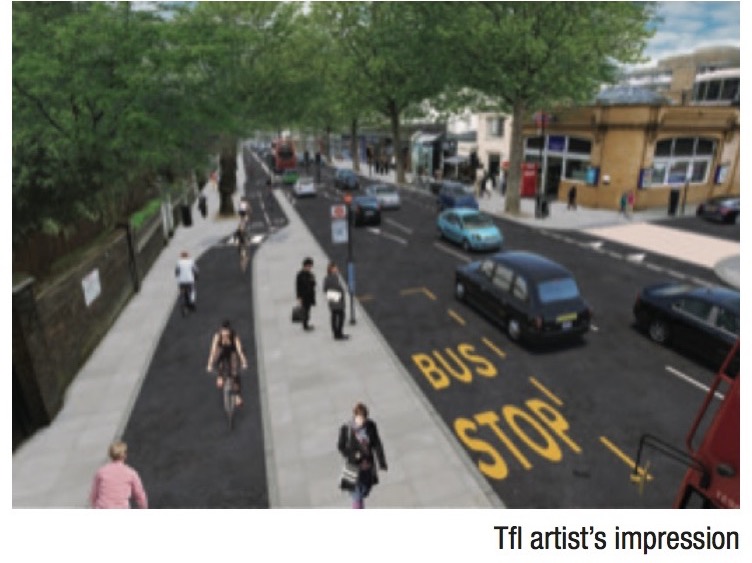 A major challenge Is being mounted against TFL’s proposals for a cycle lane from Notting Hill down Holland Park Avenue. Eight prominent associations in the area, including The Kensington Society and Norland Conservation Society, have come together to mount a campaign – including a mass circulation leaflet and a public meeting arranged at the Great Hall at the Town Hall at 6.30 on Thursday 13 June.

The doors to the meeting, organised by The Kensington Society, will open at 5.30 pm and the deadline for comments is Sunday 16 June.

The campaigners acknowledge that the Mayor’s aim to provide London with a greener, healthier and more pleasant environment by encouraging walking, cycling and the use of public transport is welcomed. But they maintain the proposals to create a cycle lane from Notting Hill down Holland Park Avenue would involve major environmental changes adversely affecting the communities living and working in the area – and would not achieve the Mayor’s intentions.

Concerns for the impact of any such scheme include increased gridlock on the already congested Holland Park Avenue; a delay in the response times for the emergency services and cyclists heading downhill, unwilling to lose momentum, creating the risk of collision with slower cyclists and people entering from side roads.

There would be a risk of a less efficient and user-friendly transport system for young families, the elderly and vulnerable low-income families’ dependent on public transport. Pedestrians would be obliged to cross fast-flowing cycle lanes in the absence of controlled crossings. There would be a removal of parking spaces and loading bays serving the shops leading to the risk of further independent shop closures. And the removal of some 20 trees, markedly detracting from the neighbourhood’s identity and leaving fewer tress to absorb pollution and baffle noise.

The winners might be fast transiting cyclists but the campaigners believe in contrast the losers would be pedestrians, particularly young families and the elderly and vulnerable, bus and taxi users, local motorists, emergency services and the local community generally.