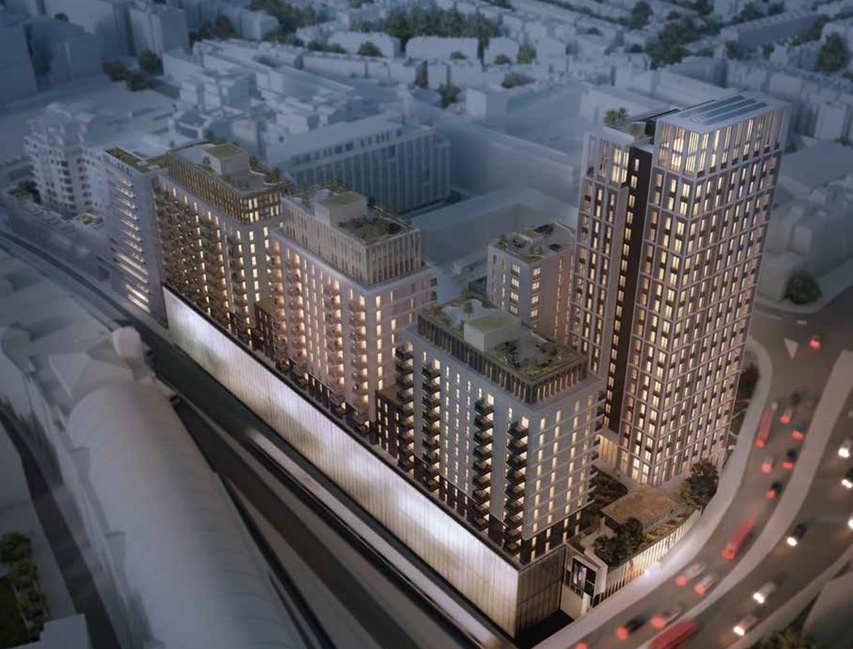 John McAslan’s designs for the land around the Tesco superstore at 100 West Cromwell Road, west London – rejected May 2019

The history of the site over Tesco at West Cromwell Road is a long and varied one. The most recent proposals, published in December 2020, have been ‘called in’ by the Mayor and a Public Representation Hearing will be held in The Chamber at City Hall on 3 February 2020 at 09.30.

The project has always been of great public interest and concern – particularly of course for those who live on the site in the flats above Tesco. It has been years with numerous different plans and now the Mayor gets involved. It also adds yet more density to Warwick Road – the subject of several developments over recent years.

The last plans were refused by the council in May 2019 and it was at this point the Mayor of London notified RBKC that he would be ‘calling the scheme in and acting as the planning authority’.

A number of changes have been made to the proposals including an increase in ‘affordable homes’ from 35 per cent to 40 per cent – 186 out of a total of 462 – available at discounted market rents. Yet again there is the promise of a new public swimming pool and community sports hub with the swimming pool at basement level and gym studios at level 1. An operator is to be appointed by the council. The idea of a swimming pool and leisure facility has been suggested in previous proposals but there is scepticism among local residents as to whether it will be accessible to everyone in the area. It is certainly needed in a part of the borough that is sadly lacking in such facilities for the public at large.

Another change is the height of building two – from 22 stories to 29 stories – already causing great concern amongst local residents. Residential parking has been removed with the exception of blue badge parking. The aim is to reduce the reliance on car use. Other ‘green’ aspects of the plan include the creation of green, public open spaces to replace the existing hard urban plaza and barren podium; adding a ‘green buffer’ between the Plaza and West Cromwell Road and the installation of air-source heat pumps to provide heating and hot water to the development to improve energy efficiency.

It is a large site, will increase the number of people living in the area, require more facilities like schools, doctors and dentists and will cause years of disruption. Everyone recognises the need for more housing in London but it is stressful for those living with years of indecision followed by years of disruption with the building phase. The Mayor may make the decision on the day but it is not certain that he will. The outcome will be anxiously awaited.