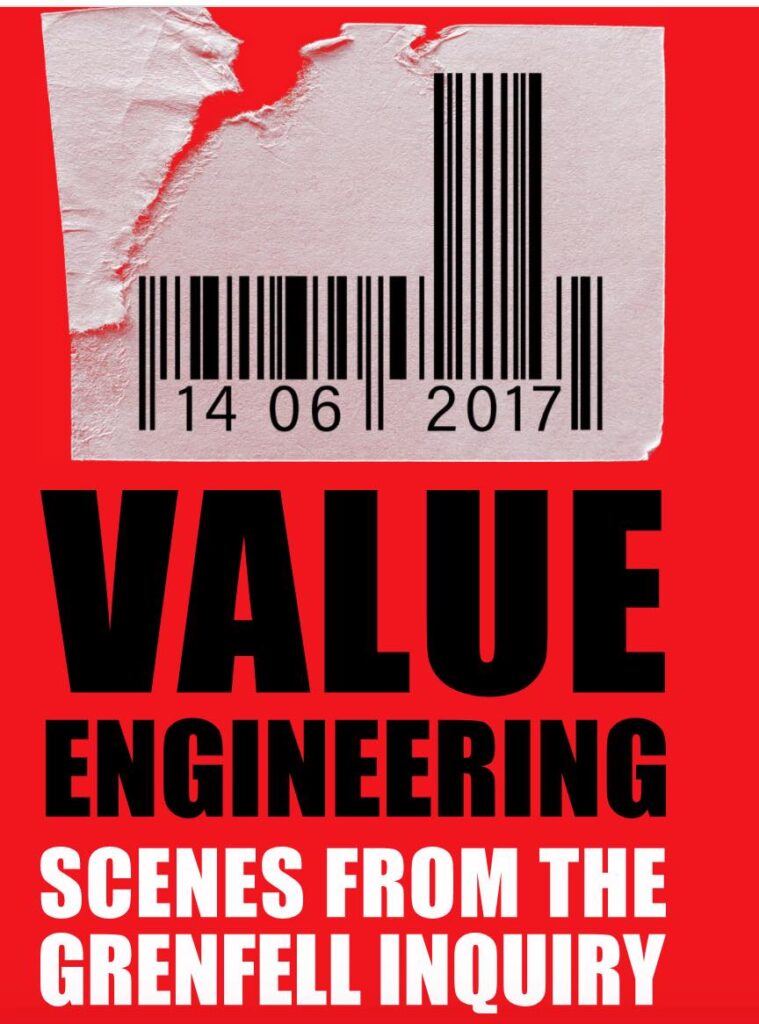 At the Tabernacle Theatre I saw a great piece of theatre and a thought provoking performance.
Grenfell was an accident waiting to happen because of long term neglect.
The inflammable cladding is a separate issue.
Tragically, it made the fire much worse. But the cladding is an example of a dishonest manufacturer concealing the flamable nature of the material and exploiting the Value Engineering process-one designed to save public money. Facilitating all of this was a complacent and contemptuous TMO.
Sitting atop of all this is a tricky political situation.It needs clear and strong local leadership to get results not the usual box ticking, buck passing and bureaucracy.
K&C is a long and thin Borough. The centre is immensely wealthy: the ends very poor. The well invested parks and public realm in the centre is enjoyed by residents who earn (or inherited) big money and pay huge taxes to beautify and enjoy their public realm.
Residents at the poorer end pay little or no tax (and many are on Social Benefit) but their housing and public services consume vast amounts of money. Balancing up means redistribution of income. Because of the extremes of poverty and wealth in this Borough stark choices have to be made.
RBK&C has got the balance wrong. We make matters worse by splurging on vanity projects that inflate the egos of self interested local politicians.
Until recently, for example, K&C had the only civic opera in the UK (Opera Holland Park). About £20 million of Council Tax was used to subsidise this so councillors could have their ‘Glyndebourne in the Park’. But no sprinklers in Grenfell………
The “balance” problem in K&C is the result of monopoly. The voter turnout is around 30% and we mostly vote Tory on autopilot. There is a huge Conservative majority as has been for more than 60 years. This does not make for balanced judgements – just corrupted power.
My hope is that the tragedy of Grenfell will be a catalyst  to allow conditions for a strong local Leader…..the Leader of the Council….to emerge and replace the puffed up, self servers who have filled the position for far too long. But this is going to require people of rectitude and intelligence- supported by the media- to keep agitating for change.
Some of the participants at the post play Q&A session last night were calling for a new political order. This won’t happen. But we need good, strong and sensitive Leadership and some serious trouble shooting concerning the stewardship of public housing.
Dame, in case you and your readers have not seen it, the video below  summarises very well the disconnect between rich and poor in the Borough.
https://www.youtube.com/watch?v=qcJPlkqOYX0
I am Conservative and yet a great critic of our Council.
I have seen countless examples of wasted money….money which could have been used to invest in poor areas. The Leader of this Council wearing another hat boasted that the construction of Holland Park School cost taxpayers nothing as it was funded by the sale of council land. What she seemed incapable of grasping was that diverting the proceeds to build the school cost £40 million more than was needed. So, not only did it cost a very big ‘something‘ but  more than double what was was necessary.

No secondary school, as Michael Gove said should cost more than £40 million HPS cost over double that.

from the Hornet’s Nest

The Dame: A PLAY FOR OUR ‘PLACE’ AND OUR TIMES
Tagged on: Grenfell    Tabernacle Theatre    The Dame