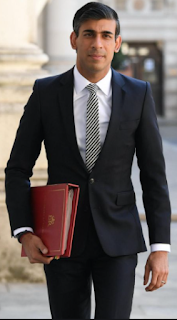 A Prime Minister in waiting

Other Chancellors of the Exchequer might bow to the advice of Treasury Officials that a financial massacre of the middle classes would get him out of his pandemic hole.

Fortunately, in Rishi Sunak we have a chancellor with a deep understanding of debt management and a caustic opinion of Treasury advice.

He knows outside the comfort of the Treasury his officials would be unemployable: certainly not at his alma mater, Goldmans.

His officials are so bereft of ideas the best and most boring idea they can put up is a capital tax on middle-class property assets: just the sort of lazy, unimaginative thinking you expect from petty bureaucrats holed up in the Treasury.

Fortunately, Rishi is a brainbox. He knows that to boot out Boris the last thing he should do is antagonise and emasculate the middle classes.

There is a host of international vultures who prey upon this country…Amazon, Facebook, McDonald’s, eBay, Starbucks, Google, Apple…by using tax ploys to artificially deflate profits.

We need Rishi Sunak to lead this country.

All he has to do is to target each of these vultures and he would be three-quarters of the way home.

Hurting little old ladies like the Dame won’t do the business and will cost him his premiership.

The Dame: THE HOUR COMETH AND IT IS NOW: MAKE THE AMAZONS ET AL PAY DOWN OUR DEBT