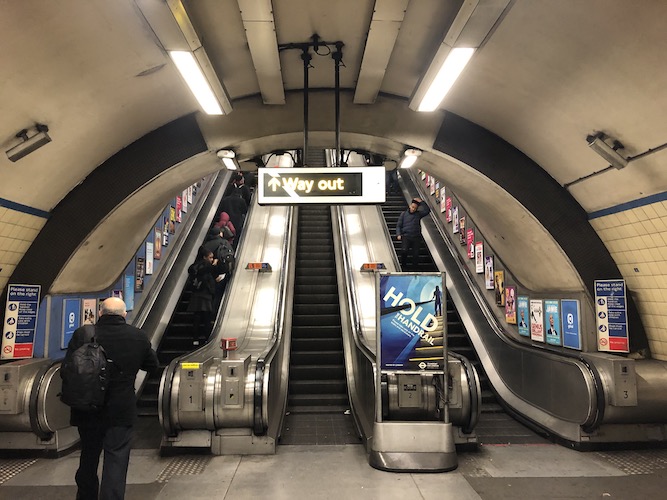 Who is right about the frequency of London Underground train? Is it Sadiq Khan who, as London Mayor, has sanctioned a reduction and the closing of 40 stations, or is Matt Hancock who, as health secretary to the whole of the UK, yesterday expressed the view that Transport for London should have the Tube network “running in full”? And why is there this very public difference of opinion about a key London public transport service? We are famously advised to “mind the gap” when boarding trains at certain Underground platforms. Now, there is a yawning gulf of contradiction about the Tube and COVID-19 transmission where crystal clarity ought to be.

There is logic in both politicians’ arguments. Hancock’s is that the more Tube trains you have running, the more physical capacity they provide and, therefore, the easier it is for people aboard them to keep two metres away from each other, in line with social distancing advice. Khan’s and TfL’s is that reducing the overall scale of the service is part of making sure a basic one can be relied on in a context where significant numbers of staff are likely to be ill or self-isolating, coupling this with urging people to only make journeys that are essential in order to avoid social interaction that can spread the coronavirus.

Whichever side you take, it is plainly far from ideal that two such important politicians are saying directly opposing things in public. How did this come about? City Hall responded instantly to what Hancock said, fuming that it is “simply not true” that a full service can be run and that the Mayor had told ministers this “countless times over recent days”. The statement also said that “Nearly a third of staff are already absent – there aren’t enough drivers and control staff to do it.” He has underlined that point today.

If such information has been clearly conveyed, Hancock’s comments seem remarkable. Had he simply not received the message from the Mayor and TfL, whose daily business running the Underground is? Or had he received it yet chosen to contradict it and, if so, on whose advice and on what grounds?

My inclination and standard default in such situations, especially the current very high pressure ones, is to blame cock-up rather than conspiracy. That said, had Hancock’s words been designed to undermine the Mayor they could hardly have been more precisely chosen. And there’s a historical backdrop to all this in the form of Boris Johnson’s eight years as London Mayor.

It was largely a period of budgetary pressures and confrontations with the various Tube unions, resulting in many strikes and urgings from other Tories for Johnson to confront and “break” them, especially the late Bob Crow’s RMT. There were calls to make Tube strikes illegal and for so-called “driverless” trains to be introduced as soon as possible, in the questionable belief that these would make the unions redundant.

Khan’s relationship with those unions is, in most cases, far more friendly and his and TfL’s approach to coping with COVID-19 appears to enjoy their support. Johnson’s administration is well-stocked with advisers from his mayoral team, including in the area of transport. Deep anti-Khan antipathy is not unknown among them. It would be mischievous at this moment to claim that Hancock’s intervention was part some larger and longer political game. But it would not be fanciful to assume that Johnson’s regime contains significant anti-Khan feeling.

What Hancock’s Tube service intervention undoubtedly highlights is a persisting confusion about what kinds of work activity is still deemed acceptable and what types of behaviour are most likely to facilitate transmission of the coronavirus.

Alarm has been expressed over some Tube carriages still being crammed with people during the morning peak, even though overall ridership has plunged. Yet a health academic has told the BBC he doubts public transport is especially problematic because people using are unlikely to be in close proximity to an infected person for long enough for it to be passed on.

The government’s advice on social distancing, published on 4 March and still on its website, says, “Coronaviruses can be spread when people with the virus have close, sustained contact with people who are not infected. This typically means spending more than 15 minutes within two metres of an infected person, such as talking to someone for instance.” How much talking do Londoners do on the Tube?

It also seems inconsistent for the government to shut down social venues and most shops because people gather in them in groups yet to exempt construction sites, where close quarters accumulations of humans routinely take place. Such workers also seem to comprise a significant proportion of those using the Tube first thing, yet Hancock defended allowing the construction industry, still visibly pretty active in Shoreditch and Bishopsgate yesterday, to be exempt from the restrictions theatres and restaurants are now under.

Disagreements about how best to deal with this public health crisis are inevitable. Politicians giving the public conflicting, vague and confusing information about how they can help is unhelpful and unacceptable.