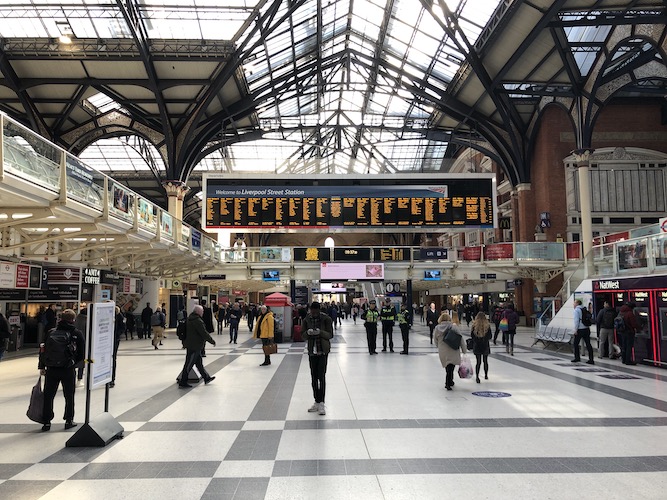 Already, our big, open city was shrinking away and closing down: our Tube trains were roomier, our streets quieter, our visitors staying away, our workers labouring from home. Yesterday’s dramatic changes in government strategy for coping with coronavirus have already accelerated those trends, and yesterday afternoon’s latest advice from Downing Street singled out London for special mention.

Boris Johnson, our city’s Mayor from 2008-2016, said the virus has been being transmitted faster in the UK’s capital than in other regions and that London is “a few weeks ahead” in terms of peak infection being reached. He urged Londoners to “pay special attention” to the new guidance that we avoid “non-essential contact” and stay out of confined social spaces such as restaurants and pubs. Later, Sadiq Khan, who attended a Cabinet Office Briefing Room (Cobra) meeting for the first time yesterday, added that dinner parties and places of worship should be avoided too.

These entreaties amount to a request for London to eviscerate itself. Its restlessness, crowdedness, mixing and churning must all be put on hold until COVID-19 has passed through its quintessential social systems with as yet unquantifiable effects. The virus is spreading into its very soul.

London accounts for nearly one third of all confirmed coronavirus cases in the country and 14 of its 55 deaths so far. Those numbers look sure to soar in the coming days and weeks. There’s a big challenge to be risen to and the Mayor has been at great pains to convey this. Appearing on TV yesterday, even his sartorial judgements seemed designed to reinforce his message – it’s not often you see Sadiq Khan wearing a tie.

Are the requests being made by his predecessor as Mayor sufficient or sufficiently clear? Should they be reinforced with the force of law? Long-term students of Boris Johnson, perhaps especially we who documented his years at City Hall, will detect in his approach his truly visceral resistance to “nannying” state interventions. He is a man whose every fibre rebels against rules of constraint, as people who worked with him recall. One recently described to me his tendency to break into a heavy sweat when given unwelcome news by “bureaucrats” that this or that course of action would bring him into conflict with regulations or the even the law. Why should Buccaneering Boris be tied down in such ways?

There is an irony, then, in Prime Minister Johnson calling on Londoners to curtail their own personal liberty. Moreover, it is wise to be wary of charismatic Tories with too high an opinion of the value of their instincts and an ideologically-loaded idea of what constitutes “common sense”. But Mayor Johnson also had a default resistance to hysteria and overreaction that could be healthy, especially when it came from the media and fellow politicians perhaps animated more by a desire to be seen to be doing something than to actually do something useful.

Many are alarmed that the UK has been taking – and, despite yesterday’s “social distancing” urgings, continues to take – a less draconian approach to managing coronavirus than other countries. Mayor Khan says catering and hospitality businesses have made the case to him for an outright ban on their opening because that would enable them to make insurance claims. Yet for London an advisory proposition for now still feels right. The city has often been characterised as essentially ungovernable beyond a certain point, a cultural and economic organism that has always evolved in unpredictable and uncontrollable ways. That is its nature, its miracle, the source of so much of its attraction and its strength.

We Londoners are now effectively asked to govern ourselves in order to limit the progress of the virus. Depressing examples of failures to do that have already been highlighted, with stories of panic-buying greed widely shared, along with photographs of bare supermarket shelves. There is plenty to be concerned about and many large decisions still to be made, not least about schools remaining open (and already there are stories of classrooms thinning out as parents keep their children at home and of some schools telling students to keep away). London local authorities will be dusting down emergency planning programmes, parts of would make your blood run cold. Empty streets can be a vacuum that lawlessness rushes to fill. The NHS looks set to face tremendous pressures. The worst could be very bad indeed.

Yet there remain strong arguments for maintaining a sense of perspective. The government’s medical experts were at great pains yesterday to emphasise that the great majority of us who contract the virus will suffer mild to middling symptoms and in some cases won’t notice any at all. Those at serious risk are the elderly and the already very unwell, and it is those Londoners who need the most protection and support, especially those whose lives are already lived largely in isolation. We are about to be reminded that London, for all its people, can be a lonely place.

But we have not yet all been asked to lock ourselves down inside our homes, or to stop supporting our corner shops and other local small businesses as long as we do so sensibly in line with basic rules about avoiding transmission that still hold. There is still much to be said for keeping calm and carrying on. The test for London is to carry on in some new, unfamiliar, very different and not at all London-like ways.