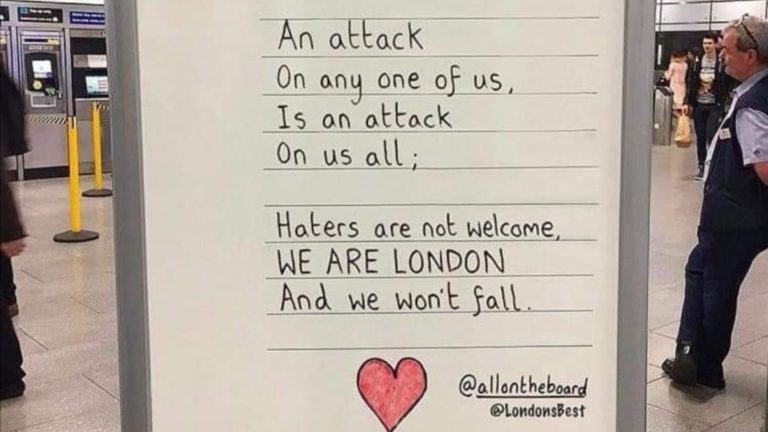 Nothing fuels sanctimony like someone else’s tragedy. Responses to Friday’s murderous violence in Fishmongers’ Hall and its aftermath on London Bridge quickly reinforced the point. As soon as phone footage was uploaded to Twitter, social media know-alls were online in force, their targets wholly predictable: that’s what you get with immigration; London is a multicultural cesspit; Usman Khan is Sadiq’s brother, har har. The deranged savagery of a man born and raised in Stoke-on-Tent triggered gleeful denunciations of the city where his awful actions took place: serve you right, “Londonistan”.

Londoners have, of course, known such crowing before, and more than once since  7 July, 2005. The one surprise is that Donald Trump hasn’t yet got round to leeching off the bloody scene. It is cheap and it’s depressing and, though perpetrated mostly by a hectoring few, provides fresh evidence for one of the several ways in which the capital is feared and loathed.

Never mind that one of the Londoners who fought the attacker was a Polish chef who worked in Fishmongers’ Hall, a man with the type of job done by thousands of migrants from the European Union to the capital. Never mind that the mindset of extreme Islamism is itself fundamentally and viscerally opposed to the London of liberty and human variety that most Londoners cherish. In the heads of nativist London-haters, the city’s openness to people born overseas can only be a form of self-contamination, for which Islamist terror is a deserved, self-inflicted punishment.

In this version of London – the ethnically-corrupted, un-British London of the purist nationalist imagination – the city is both core cause and disastrous ill effect of all that has been abandoned and betrayed by the island nation’s political class since the defeat of Hitler. For them, the capital’s political leader, though placed in City Hall by over one million of its voters, is no personification of an ideal of liberal pluralism and equal opportunity, but living proof that the loss of a natural national essence is embedded in the corridors of power. They love to see that London suffer.

Assaulted by such thoughtless, told-you-so delight, there is a powerful urge to hit back: to scold the gloaters for exploiting the cruel deaths of blameless people; to denounce them for their dismal bigotry. And, yes, those things should be named and shamed for what they are. But we should also heed the need for a more measured and much broader response to emotions the online haters express in their most vindictive forms.

Unease about immigration, Islamism and the effects of globalism are not necessarily proof of poisonous atavism. And while London symbolises much that many non-Londoners fear has gone wrong with the United Kingdom – and with England in particular – it should not be forgotten that plenty of Londoners feel similar anxieties, and not only those of white British culture and descent.

While the 2016 EU referendum vote can be interpreted as, to a significant degree, a reaction against social values and demographic trends that London is seen as typifying, it must not be forgotten that 40 per cent of London’s voters favoured Brexit, including close to 30 per cent in even the strongest Remain boroughs. They were and are a minority, but a pretty hefty one. Moreover, Londoners have other, sometimes related, concerns about the speed and forms of change in their city as it continues to rapidly grow. None of these sentiments should go ignored.

Friday’s horrible events are to be deeply mourned, both for the heartbreaking bereavements they’ve inflicted and for what they’ve underlined about the troubles of the world. They also give grounds for stepping back and looking afresh at the bigger picture of which those events now form a chilling part. London is the capital of a UK that is disturbingly divided along lines of outlook, attitude and identity. For many, everything that is wrong with the UK is distilled within its capital city. Those of us who beg to differ must keep working on building a bigger and better argument to persuade them that they are wrong.