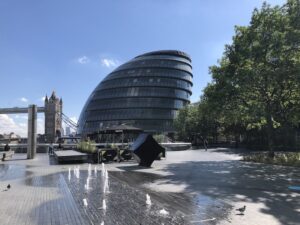 Joe Biden’s US presidential election win has been hailed across the world as not only a triumph for progressive values (precisely what those are is another conversation), but also as a victory for truth over bare-faced lying. And rightly so. Even in clear defeat, Donald Trump, the now outgoing president, continues to spread malicious falsehoods and conspiracy theories with the aim of firing up the fury of his most aggressive supporters and casting doubt on the legitimacy of Biden’s win. The ousting of this whining, vicious demagogue is a proper cause for widespread celebration. But it is also a reason for sober reflection on the truthfulness or otherwise of political campaigning in the UK, including here in London.

The next London Mayor contest, postponed by a year to 6 May next year because of the pandemic, is already underway and the influence of Trump’s pernicious tactics on it is apparent. For months, Conservative candidate Shaun Bailey has been claiming that the the current Mayor Sadiq Khan “bankrupted TfL“, which is a lie. That is not simply because, of course, Transport for London did not (quite) run out of money or that “bankrupt” is a sensationalist, incorrect term for a public body becoming financially unable to provide an adequate service. It is because it is a deliberate attempt to deceive Londoners into thinking that something other than the devastating impact of the pandemic on public transport use – and hence income from fares – plunged TfL into sudden financial peril.

Even transport secretary Grant Shapps – a pretty slippery operator, as we’ve seen with regard to Hammersmith Bridge – has consistently acknowledged that the virus is the “most important” cause of TfL’s funding troubles. Bailey himself just about managed it in an article for the Times (£), perhaps concluding that readers of a “quality” media outlet might rumble the fiction he’s been peddling on Twitter. Yet dishonestly blaming the management of TfL under Khan for its need for emergency financial help this year has sometimes seemed to be national government policy too, with Boris Johnson himself using Prime Minister’s Questions to make the disgraceful false claim that TfL’s woes are “entirely” the fault of Mayor Khan. When Johnson lies it’s no surprise, but even by his standards that was extreme.

The Bailey campaign should wean itself off lying, and not only on ethical grounds. Last week, the BBC reported criticisms by a transport union of a website launched under the name Transport for London Bailout Facts. The site is Conservative mayoral campaign material pretending not to be. Like the leaflets bearing the same claims that have been landing on Londoners’ doormats – and, for that matter, like Bailey’s campaign website – this propaganda only owns up to being the work of the Tories in the small print at the bottom, where it says it is “published by Kerry Halfpenny on behalf of Shaun Bailey” and gives the address of the Tories’ London headquarters.

Big US media networks have described the lies and baseless, evidence-free allegations of Donald Trump as what they are. The BBC has taken the same approach to Trump. The Corporation’s readiness to report credible accusations that Bailey’s campaign is using dishonest tactics to make dishonest claims suggests this most revered of Big Media might be prepared to call a lie a lie during the London mayoral race as well. Is that a risk Bailey, Halfpenny and whoever else is in charge of the Tory candidate’s City Hall bid wants to take?

Candidates downplaying party affiliations to the edge of invisibility is not a new tactic and it is not confined to Conservatives. Neither is producing shifty election material: leaflets with laughably misleading bar charts have long been a feature of Liberal Democrat campaigns, for example. And Labour is not averse to pushing populist buttons that ignore inconvenient truths, as Sadiq Khan did during a (largely impressive) speech at the Centre For London annual conference last week when framing a Corbynesque opposition between “luxury penthouses” for “the privileged few” and “affordable homes for the many”: the Mayor knows perfectly well that, like it or not, a significant amount of London’s new sub market-priced homes are financed by the profits from “luxury” developments.

More generally, the line between, on the one hand, spin, exaggeration and the selective use of facts by politicians and, on the other, plain untruth can sometimes be at least debatable. All that said, journalism should not permit outright lying by politicians to go unchallenged, including in the interests of “balance”. This website, small though it is, will make its contribution to calling falsehoods what they are during mayoral campaigning, from whatever source. On London wants to report fully and assess fairly the bids and programmes of all candidates for Mayor likely to win significant vote shares, including Bailey, as I have told him in person. But lies will be ignored or labelled accordingly. Readers and voters deserve nothing less.