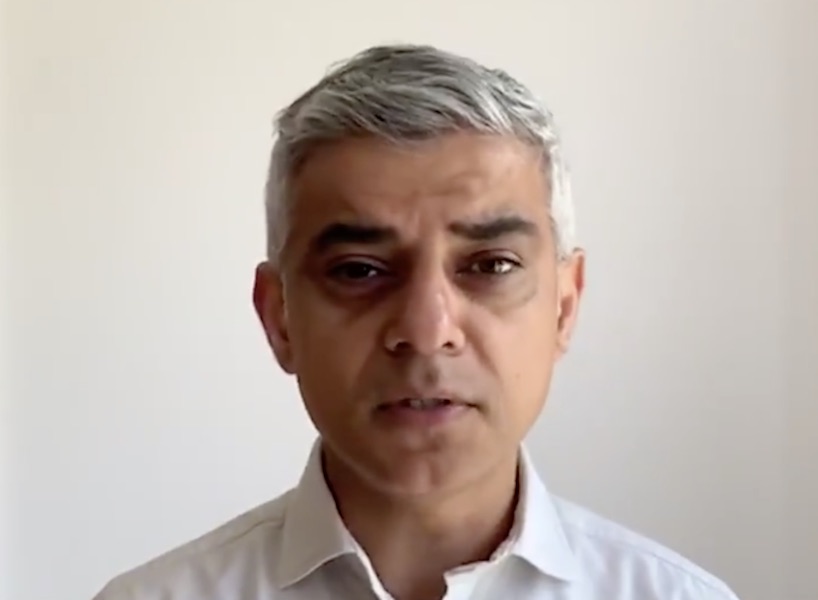 The Mayor has said that the number of daily new cases of the coronavirus Covid-19 in the capital is likely to continue rising for a further 10 days or so and that “we are nowhere near” being in a position to lift the restrictions on movement and social mixing ordered by Prime Minister Boris Johnson.

Speaking on BBC Radio 4’s Today programme, Sadiq Khan said that, based on his regular discussions with public health experts, “We think the the peak, which is the worst part of the virus, is probably a week and a half away,” and he stressed his belief that “the lockdown” announced by Johnson on 24 March should “absolutely” be maintained.

Khan told listeners that 224 of the nearly 800 lives recorded as lost to the virus across the UK yesterday had been in London and that this was far too many. He added that, “At the moment, thankfully, we’ve got some spare capacity in intensive care units in London, but we can’t be complacent at all.” The latest figures have been released as the first patients have been admitted to the 4,000 bed emergency “field hospital” NHS Nightingale that has been constructed in the ExCel centre in Newham.

The Mayor also revealed that he continues to be at odds with the government over curbs on construction work, saying “there is disagreement” over which types of it should be classified as essential. Building activity on both large commercial sites and in residential properties continues to take place in many parts of London.

While declining to say if he thinks further controls on peoples’ freedoms should be introduced, the Mayor said that even as a former human rights lawyer, he supported the “huge amount of discretion” allowed by changes to the Care Act 2014 introduced with cross-party support to enforce social distancing advice. Emphasising the importance of public parks to the “many many Londoners [and] many people across the country,” who “live in overcrowded accommodation, often with young children” he appealed to people not to sunbathe, have barbecues or play team sports in them.

“The vast, vast majority of Londoners, and we’re a city of nine million people, are following the rules, and they can be commended,” he said. “There is a small minority who, last weekend, particularly on the Saturday, were frankly behaving as if we weren’t facing a global pandemic. My message to that small minority is, please understand, your behaviour has an impact on others, because it means that the virus spreads.”

The most recent national figures show the daily rate of increase of new cases in London slowing and reducing by comparison with other regions, raising the possibility that efforts to the control the virus are proving effective in the capital. Transport minister Chris Heaton-Harris reported yesterday London Underground ridership has fallen by 94 per cent and bus ridership by 80 per cent, with use of Transport for London’s road network down by 63 per cent.