TfL is to introduce a combination of changes to assist with social distancing, limit public transport use and protect air quality improvements 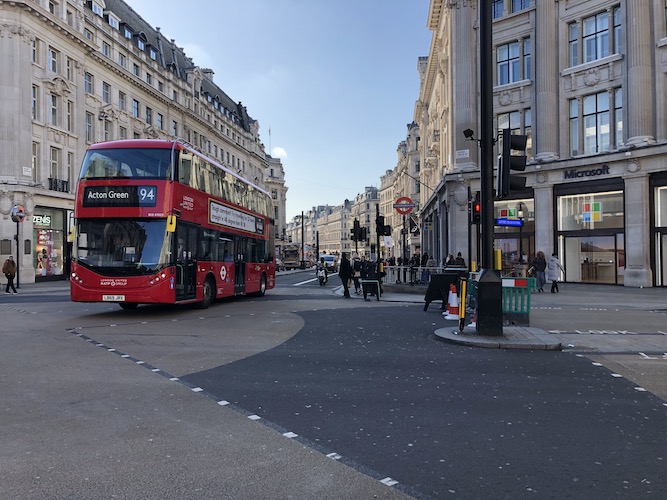 The Central London congestion charge and ultra low emission zone will be reinstated from next Monday 18 May along with the London-wide low emission zone in an attempt to damp down a recent rise in private vehicle travel during lockdown conditions.

Transport for London and Sadiq Khan have also announced plans to close some of the roads TfL controls to all motorised vehicles, except buses in some cases, and have appealed to Londoners to complete journeys between mainline stations by walking or riding bicycles, rather than by using the London Underground. The Mayor is underlining that that using public transport “must now be a last resort”.

The combination of measures is intended to make it easier for Londoners to maintain social distancing as those who cannot work from home begin returning to their workplaces under the government’s easing of the coronavirus lockdown restrictions, while also restricting private car use to prevent build-ups of congestion and simultaneously protecting recent improvements in air quality.

As part of the previously-announced Streetspace programme for widening walkways and creating additional separated cycleways, TfL says it is considering limiting access to streets between London Bridge station and Shoreditch, Euston and Waterloo, and Old Street and Holborn to buses and cyclists. Similar changes might also be introduced for Waterloo Bridge and London Bridge along with widened pavements. Access for disabled people and the emergency services will be maintained.

From 22 June the daily congestion charge will be increase to £15 from a standard £11.50 and the zone’s hours of operation extended by four hours to 07:00-22:00, each on a temporary basis in advance of a “wider review” of the congestion charge agreed as part of the government funding deal with TfL, announced yesterday. Bus fares will begin to be collected again soon.

City Hall is characterising the forthcoming changes as making Central London “one of the largest car-free zones in any capital city in the world” and hopes they will encourage more “active travel’ in the long term and help make permanent at least some of the improvement in London’s air quality since the lockdown began.

Sadiq Khan described Covid-19 as posing “the biggest challenge to London’s public transport network in TfL’s history” and said it will take “a monumental effort from all Londoners to maintain safe social distancing on public transport as lockdown restrictions are gradually eased” .

He stressed the objective of keeping the number of people using public transport “as low as possible”,  adding, “we can’t see journeys formerly taken on public transport replaced with car usage because our roads would immediately become unusably blocked and toxic air pollution would soar”.

Dave Hill: London road pricing to be restored from 18 May and cars to be banned from some streets
Tagged on: congestion charge    covid-19    Dave Hill    Sadiq Khan    TFL    transport