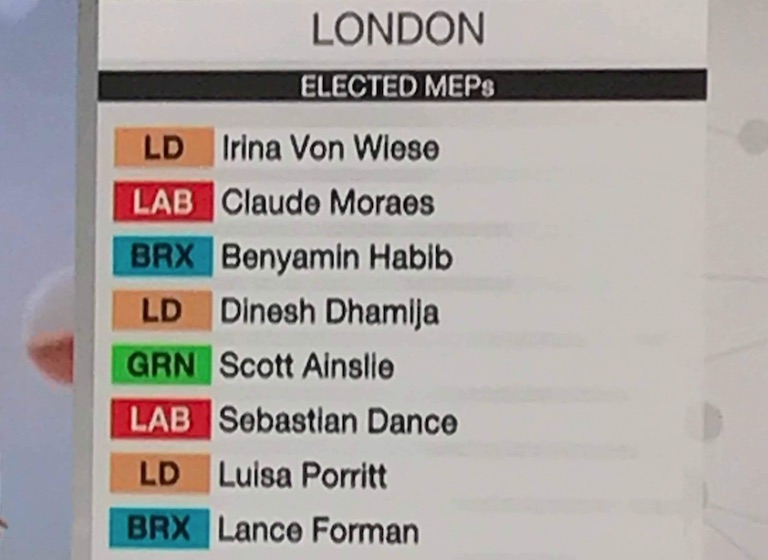 The Liberal Democrats have won the largest number of London’s eight European Parliament seats, taking three compared with two each for Labour and the Brexit Party, with the Greens securing one and the Conservatives and UKIP wiped out completely.

The result is calamitous for the Tories, who had previously had two seats, and very worrying for Labour, whose total was halved from four in a city where they have been gathering strength in other kinds of elections in recent years. By contrast, the Lib Dems had entered the contest with no London MEPs at all.

The Brexit Party, a vehicle for former UKIP leader Nigel Farage, will regard their two seats as a significant advance in the capital, where UKIP won only a single seat at the last European elections five years ago and has historically made less impact than in other parts of England.

Lib Dem leader and MP for Twickenham Vince Cable said of the national result, which has seen his party move into second place ahead of Labour and the Tories, “We have shown ourselves as the strongest Remain force in British politics”.

Labour’s Emily Thornberry, the MP for Islington South and shadow foreign secretary, described her party’s ambiguous stance on Brexit has having been unclear and said it should now change its position to firmly supporting a second referendum or so-called People Vote. Her sentiments have been echoed by other London Labour politicians, including Camden Council leader Georgia Gould, Hammersmith & Fulham Council leader Stephen Cowan and Tottenham MP David Lammy. Ilford North MP Wes Streeting described Labour’s result in London as “terrible”.

Labour London Mayor Sadiq Khan described his party’s performance across the country, which saw its vote share fall by nearly eleven per cent, as “extremely disappointing” and repeated his call for a “final say” referendum “with the option of staying in the EU”.

For the Conservatives, former London Mayor Boris Johnson, MP for Uxbridge & South Ruislip and a Brexit-supporting contender for the Tory leadership, has said that the election results across the country, which saw his party’s national vote share crumble from around 25 per cent in 2014 to less than 10 per cent, were a “final warning” from voters and that only coming out of the EU “properly” would save it from permanent damage. Johnson has said he would be prepared to leave the EU without a deal if he succeeds Theresa May as Prime Minister.

European Parliament seats were allocated under the d’Hondt form of proportional representation. The vote shares of the parties were: Lib Dems 27 per cent; Labour 24 per cent; Brexit Party 18 per cent; Green Party 12 per cent; Conservatives eight per cent; Change UK five per cent. Turnout was 41.3 per cent.

The Lib Dems took the largest vote share in 15 of the capital’s 32 boroughs, compared with Labour doing best in 13 and the Brexit Party topping the poll in four. The Conservatives failed to finish top in any.
Outcomes in individual boroughs include the Lib Dems taking the largest vote share in Lewisham, where every councillor and all three MPs are Labour, and in Islington, which has only one non-Labour councillor and where Thornberry and Labour leader Jeremy Corbyn are MPs. But in all-Labour Barking & Dagenham, which was one of just five of London’s 32 boroughs to vote Leave in 2016, Labour secured the largest share of the vote, with the Brexit Party in second place.

The Conservative stronghold of Kensington & Chelsea, which voted 69 per cent to Remain in 2016, swung heavily behind the Lib Dems with the Tories coming fourth,  while in Havering, another of London’s Leave boroughs, the Brexit Party won a huge 47.6 per cent of the vote compared with just 9.9 per cent for the Tories. The Lib Dems finished second there and Labour third.