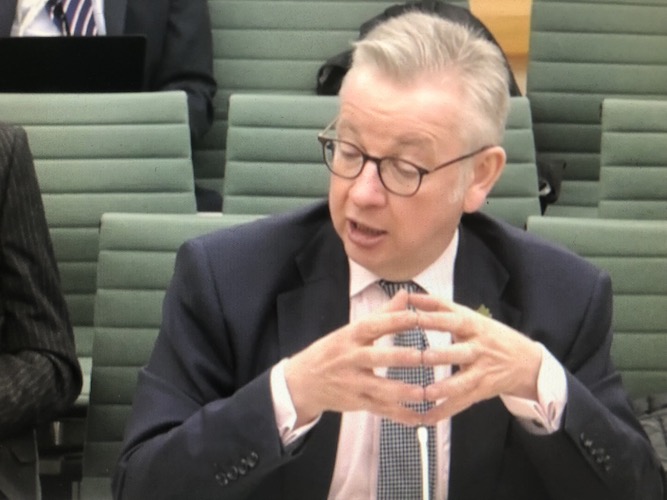 Were there any doubt that the government’s “levelling up” agenda is explicitly designed to exclude London and Londoners, Michael Gove has dispelled it. Appearing before a committee of MPs, the Secretary of State for Levelling Up demonstrated beyond doubt that his job has little to do with addressing geographical inequalities across and within the whole United Kingdom, and everything to do with sidelining the capital and its people in favour of wherever he decides is more deserving.

Asked about the allocation of housing resources, the Conservative minister agreed with the view of the Labour MP for Sheffield South East that putting them where demand and prices are highest is counterproductive in terms of “levelling up”, claiming that this already “reinforced a geographic trend in our society which we want to rebalance”. Gove said he wants to discuss with Homes England “how we can invest in proper urban regeneration projects outside London and the south east”. The UK quasi-nation of Outside London continues to be born.

Discussing the UK Shared Prosperity Fund, which is supposed to compensate areas for the disappearance of EU financial help, Gove said that Scotland, Wales, Northern Ireland and Cornwall will definitely “not receive any less” than they would have without Brexit and that in terms of the rest of England “part of taking back control is being able to make an assessment about where additional support might be needed”.

Before the Conservative Party conference, Gove said that failing to deliver “levelling up” would be a betrayal of people who voted Leave. Greater London contains areas of high and persistent rates of poverty, the highest in the country by some measures, and the most extreme. But do you fancy 60 per cent Remain London’s chances under a “levelling up” evaluation made on that basis?

Regarding local government, Gove said it would be wise under “levelling up” to proceed with caution towards the goal of allowing local authorities to retain 75 per cent of their locally-generated Business Rates because some areas are more “resilient” in terms of incomes from both that source and from Council Tax than others.

Those areas are “relatively speaking more in the south east,” he observed, and explained that his department is looking at “what headroom we have for a redistribution of funding” to reflect need. “It’s not as crude as seeking to help local authorities in the North more,” he maintained, but “if it had to be boiled down down to a single sentence then that is very much something that is in my mind”. This will bring little comfort, relative or otherwise, to Barking & Dagenham or Newham.

Is Gove aware of London’s acute and deepening housing affordability crisis? Is he conscious of the connection between a thriving and attractive London and the economic health of the rest of England and Scotland, Northern Ireland and Wales or has he chosen to ignore or to forget this?

He was asked what he intends to do about devolution: his long-awaited White Paper on “levelling up” was originally, before he acquired his job heading his enlarged department, to be about that subject. Is he keen on Whitehall giving away power? Gove assured the committee that he would like to see “fewer strings attached” to funding allocations “where you’ve got strong local leadership”. We must, for now, await his definition of “strong”.

Gove added that “some” of the combined mayoral authorities in England may be considered worthy of being given additional powers. “I’ve had the opportunity to talk to combined authority Mayors about their expectations about the [Levelling Up] department,” he revealed. I’m told Sadiq Khan has attended a meeting with Gove some of those fellow English Mayors, but London, where English mayoralties began, was given no specific mention by the Secretary of State for Levelling Up.

There are prominent Conservatives in London who recognise the folly and unfairness of national government neglecting and damaging London.

At the beginning of October, Elizabeth Campbell, Leader of Kensington & Chelsea, and Rachael Robathan, Leader of Westminster, reminded readers of Conservative Home that in his (largely incoherent) speech about levelling up, delivered back in July, Johnson had acknowledged that great inequalities exist within London and denied that “levelling up” need be at London’s expense. They wrote that the unfolding autumn, with its coming spending review and (possibly) levelling up White Paper would provide “a crucial test” of the former London Mayor’s commitment.

We’ve had the budget and the spending review, and now we’ve heard from Michael Gove. I wonder what Campbell and Robathan are thinking now.