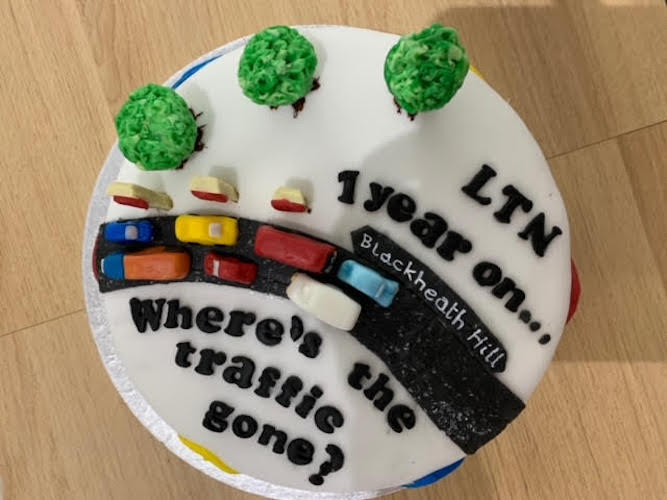 They were gathered among trees at the top end of genteel Hyde Vale where it meets the long low growl of the A2. There was drizzle in the air but spirits seemed high among the roughly 40 people protesting against Greenwich Council’s local Low Traffic Neighbourhood scheme. There were speeches, chats and jokes and a cake on which was iced the question: “LTN one year on…where’s the traffic gone?”

The cake’s query captured a central issue for many of the Londoners opposed to the new wave of LTNs introduced by boroughs early in the pandemic using government funding provided for the purpose, much of it allocated by Transport for London.

The measures’ aims include reducing the amount of motorised traffic passing through residential streets as part of Sadiq Khan’s wider Streetspace programme, announced in May 2020. Streetspace also encompassed new “temporary” lanes on roads for bicycles. Stated aims of this “bold overhaul” of London’s streets include enabling more people to “walk and cycle as part of their daily routine” and putting “clean, green and sustainable travel” at “the heart of London’s recovery”.

Eighteen months on, how far have these objectives been achieved? Some residents of streets bordering LTNs complain that traffic near their homes has worsened as a result of them. Arguments rage about the extent of this effect, how long it might last and whether LTNs are benefiting affluent Londoners at the expense of poorer ones. Meanwhile, spectacular public claims about huge increases in cycling appear at odds with the content of private TfL briefings, and the “car-led recovery” TfL and the Mayor have long said they wish to avoid seems to be taking place.

All of this raises a question larger than any one cake could accommodate as London inches away from Covid: what and who has the Streetspace programme been for?

For Paul Wheeler, Labour Party member, On London contributor and a leader of what he humorously terms the “Blackheath revolt”, the primary outcome of the new LTNs in particular has been to further entrench social disadvantage, with leafy side streets gifted quieter lives at the expense of taxpayers and poorer Londoners residing on main roads, who get bigger doses of pollution as a result of displaced traffic. 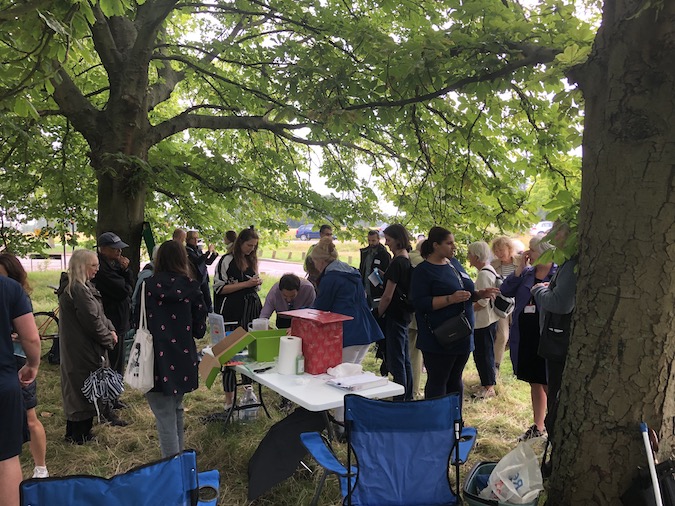 At the event I was told by others that the West Greenwich scheme might have reduced traffic in the network of little streets between Greenwich town centre and Greenwich Park and Blackheath but had intensified it on Greenwich South Street to their west and on the A2 New Cross Road and Blackheath Hill. Labour councillor Pat Slattery, recently elected for the Greenwich West ward, said that delivery drivers who live in council housing in the ward told her when she was canvassing that their jobs have become harder.

Concerns about the LTN have already led to adjustments. But arguments against them are contested, both locally – for example by a group called Save Greenwich Neighbourhoods – and London-wide by the energetic “active travel” lobby, which has attained great influence at TfL, in City Hall and in the capital’s Town Halls.

Amid conflicting claims from all sides, I’m generally agnostic about the impacts of LTNs, which are, of course, nothing new to the capital: I’ve lived within one in Hackney for at least 15 years and I am glad of it: memories of rat-runners using my street as a race track are blissfully distant. Even so, it seems that the effects of the new bunch could be very mixed.

Responses to Ealing Council’s recent consultation on the nine new LTNs hurriedly brought in in that borough under the leadership of cycling enthusiast Julian Bell found that most of them are opposed by those who live within and close to them. Bell’s successor as leader, Peter Mason, who partly owes his elevation to voter pushback against the policy as conducted by Bell, is promising to do more to secure residents’ support for such measures in the future.

Given all the road rage Streetspace has inspired, the value of consensus-building and a full recognition of all its implications seems obvious. The problem is that some of its most eager proponents seem oblivious to this. The fact that cycling has long been the transport choice of only a very small group of Londoners, most of them affluent white males, does not mean cycling is a bad thing or that those who do it are bad people. What it does mean is that nurturing a mass London cycling culture will take rather more than redesigning streets and that reacting to stubborn demographic realities will need something other than indignant denials.

There is no question that Streetspace’s objectives have been good: more people choosing to make journeys by bicycle or by foot instead of by motor car can only be a good thing for the economically-efficient use of road space, for air quality and for individual physical fitness. But to what extent has the programme achieved this? We need to wait a little longer until robust comparisons can be made between road use after the pandemic and before. That said, amid the deluges of triumphalist data bandied around, figures indicating substantial switching from car-use to bike-use or walking are hard to come by. 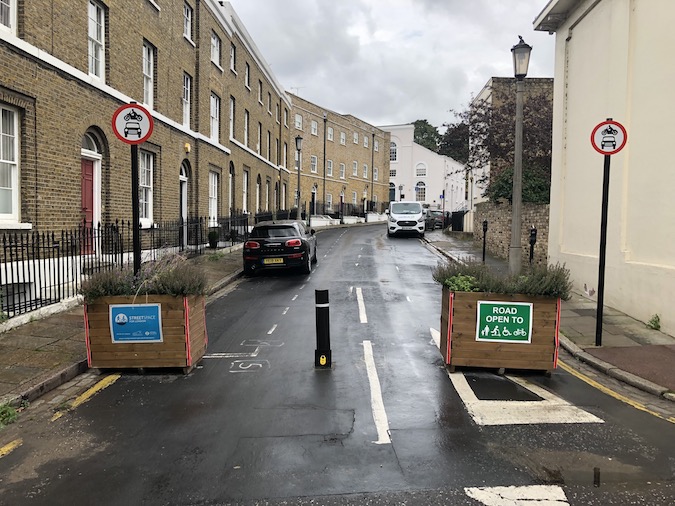 A large obstacle to realistic assessments of change and gains is that “active travel” campaigning – which, in practice, mostly means cycling campaigning – has become a quasi-evangelic movement, one that is tightly entangled with lifestyle preferences, social identity and blind faith. This contributes to cycling having an image problem that too many cycling champions refuse to recognise.

Getting past that kind of obstacle won’t be achieved by a few planters and bike lanes. Sadly, such subtleties may be beyond the many layers of London governance permeated by active travel optimism bias and, history strongly suggests, will almost certainly escape Boris Johnson’s transport adviser Andrew Gilligan, a cycling true believer whose top down impositions have been integral to the government’s effective takeover of TfL.

Gilligan, incidentally, is a figure of local interest and some mirth among the LTN dissidents of West Greenwich. He used to live on Hyde Vale. I’m told he moved not long ago.